Surrounded by Himalayan Mountain range, Hunza is a sacred valley located 2,700m above the sea level between North of Indian Mountain and North West of Karakoram Mountain range of Pakistan.
There lies a Shangri-La like kingdom and village which was ruled by rajah until 1973 called Hunza, famous for its longevity.
The power of Hunza water was reserched and revealed by Dr. Patrick Flanagan. With his amanuensis “Elixir of Ageless” that was published in 1986 and over 30years of his study, this is the introduction of the miracle and longevity secret of Hunza water. 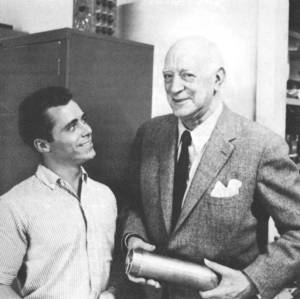 On the left is 17years old Dr. Flanagan with and Romanian scientist Henri Coanda (1886 – 1972) known as the pioneer o fluid dynamics.

Since their encounter at Huyck Research Laboratory, Dr. Flanagan and Dr. Coanda began to investigate Hunza Water and its relation to the longevity.
At the time, there were two important research projects in Huyck Laboratory.
One was on fluid dynamic mechanism discovered by Dr. Coanda and later named as “Coanda Effect”. The other was an electronic transmission device invention made by Dr. Flanagan called “Neurophone”.

Both being inventors, they understood each other and became a good friend, while working as Huyck Laboratory consultant.

In June 1963, Dr.Coanda returned to Romania to supervise its science academy. Upon his leave, he entrusted his life-long study journal on “Fountain of Youth” to Dr. Flanagan, believing that he will one day discover the secret of Hunza Water and share its benefit with the world.

During his research, Dr. Coanda was forced to make a difficult journey to Hunza Kingdom and while traveling, he visited places such as deep in the mountains of Georgia, untouched valley set in Outer Mongolia, Vilcabamba valley of Ecuador, lone valley of Peru and many other places that said to prosper with longevity and good health.
People who live in those lands unanimously said that they maintained their health and longevity was maintained by the water of the land.
When Dr. Coanda inspected the water, it was cloudy and originated from glacier. The glacier water naturally has no minerals and holds almost exactly the same property as distilled water, but water melted from glacier has passed-through special deposit and collected colloid-like minerals within.

Dr. Coanda also took back water from each region and made snow particle by using artificial snow creating device called “Coanda nozzle” and studied the life-span of each snow flakes and its origin.
In the end, he came to the conclusion that water’s unusual molecular structure has indefinite effect over longevity and entrusted Dr. Flanagan to unravel its secret and recreate the Hunza Water.

So the challenge to recreate the Hunza Water began.
First, he tried to create nanocolloid particles from the soil collected from various lands and added these to the distilled water.

He tried over thousand times but wasn’t able to produce water that had the same colloid properties as the Hunza Water. The main problem was the size of the colloids, as it was too large to pass through the human molecular cells and had extremely low electrical charge.

Over 20years had passed since Dr. Coanda handed his legacy of Hunza Water research.
During that time, Dr. Flanagan went to Egypt on his honeymoon and met a fellow scientist Dr. Gael and started a joined study. In order to increase electrical charges to the colloids, they’ve theorized a unique device called Vortex Tangential Amplifier. This device enables the creation of perfect vortex and when the newly formed colloid got sucked into the eyes of the wave, which is the size of less than micro millionth inch, the colloid was strongly over-electrolyzed.

The colloids made by this device held strong electronic charge with decreased surface tension of 73 to incredible 25 dyne. As a result, Dr. Flanagan managed to create water that has better colloids property than the Hunza Water.

In order to test its potentiality, the two went on liquid diet.
Their only intake was this Hunza-type water with high colloid property and fruits and vegetable juice of their choice for half a year. Although concerned at first, they’ve kept perfect health and weight with clear mind and senses.

In August 1984, their acquaintances praised their remarkable results and were eager to test it out themselves. The water was given to about 2000 people and they all came back for more.
In response, Dr. Flanagan decided to name this wonderful water as Liquid Crystal colloid, LLC.
The research continued and his further discovery suggested that best surface tension for removing toxin from human body was 55~65 dyne. When Liquid Crystal Colloids, LLC was diluted for drinking, he made sure the surface tension remained within this limit.

Dr. Patrick Flanagan and his long research into this innovative technology are patent granted as “Flanagan Microclustar Silica”.